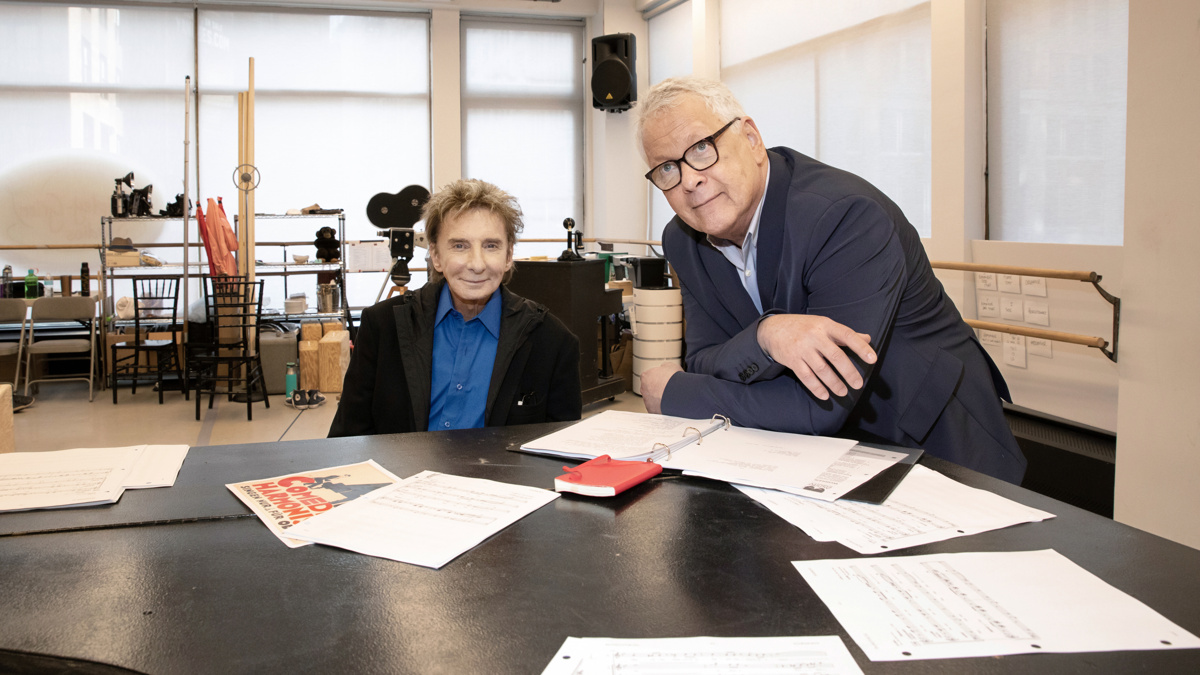 Barry Manilow and Bruce Sussman once dreamed of being “the next Rodgers and Hammerstein.” Along they way, they found massive success as collaborators with Manilow skyrocketting as a chart-topping performer. Now, over 30 years since they first found fame with “Copacabana (At the Copa),” the two are bringing their new musical Harmony to the New York stage for the first time. Here, they talk with Broadway.com Editor-in-Chief Paul Wontorek about the musical, which begins performances at the Museum of Jewish Heritage on March 23.

Manilow and Sussman first met through the BMI Lehman Engel Musical Theatre Workshop, and there was an instant connection. “I was going to be a Broadway composer, an arranger for pop music,” Manilow said. “I was playing piano for everybody in New York, everybody. The idea of singing and entertaining was never in my head.”

Of course, Manilow did become a performer and catapulted to fame thanks to songs like “Copacabana (At the Copa),” “Mandy,” “I Write the Songs” and more. Manilow says the musical is unlike the songs for which he is known. “It’s a grab bag of different styles,” he said. ” [The Comedian Harmonists] did every style, so I dove in and wrote in different styles. Each song is totally different than the song before. I loved doing it.”

Harmony tells the true story of the Comedian Harmonists, an ensemble of six young men in 1920s Germany who took the world by storm with their signature blend of sophisticated close harmonies and uproarious stage antics, until their inclusion of Jewish singers put them on a collision course with history. “We felt like it was our duty to make people aware of this group,” Manilow and Sussman said. “They were so talented and their story is so tragic and nobody remembers them and people should. They were a very inventive and entertaining group that should not have gone away. It’s our duty to make people aware of them.”

Boasting a cast that includes Broadway alums Chip Zien and Sierra Boggess, finding the perfect six to bring the group to life on stage was imperative. “It’s a very difficult show to cast,” Sussman said. “They have to be triple threats. These six are hands down, in terms of the sound they’re creating, the most authentic six we ever had.”

The musical has had a long journey to New York. Its world premiere at the La Jolla Playhouse in 1997 starred Danny Burstein, Rebecca Luker and Patrick Wilson. Tony Yazbeck, Wayne Alan Wilcox and Leigh Ann Larkin led the principal cast of the 2013 run at the Alliance Theatre in Atlanta and at Los Angeles’ Ahmanson Theatre in 2014. A private reading took place in August 2019 with Jessie Mueller, Kate Baldwin, Reeve Carney, Rob McClure, John Behlmann, Jarrod Spector and Nicholas Barasch.

“One of our characters says, ‘bottom line is I would just like people to know that three Jews and three Gentiles got together and made harmony and found harmony in the broadest sense of the word and that they not be forgotten,'” Sussman said. “That’s what we want audiences to walk away with.”