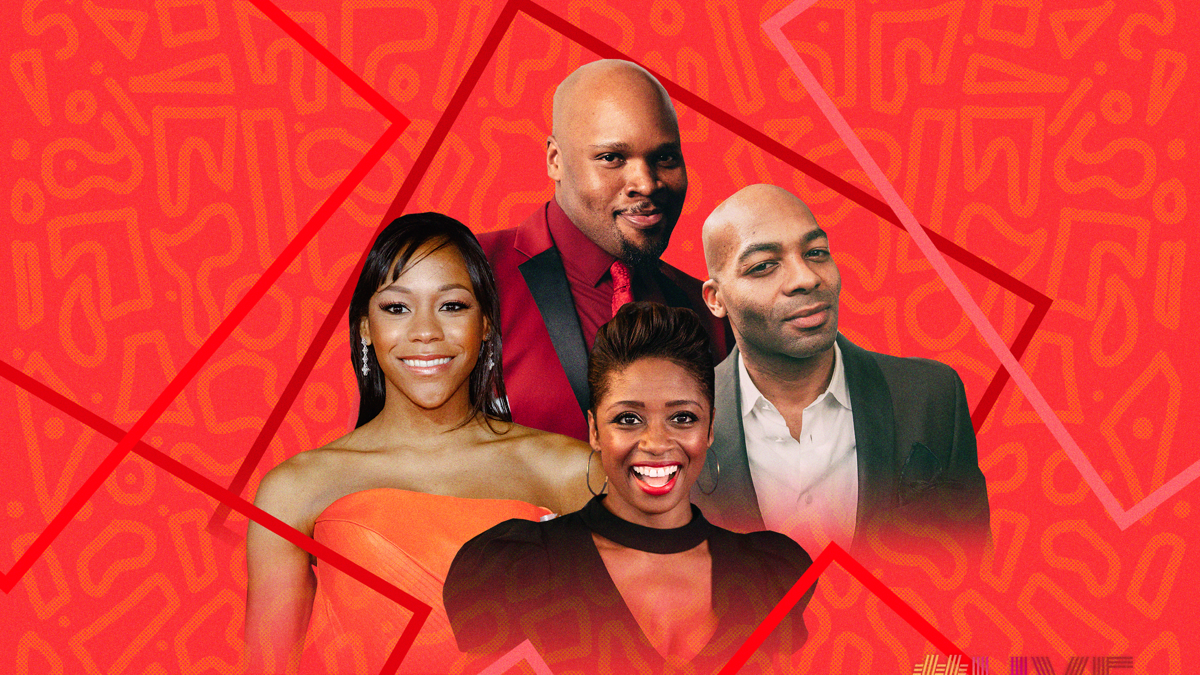 With global protests calling for justice and racial equality occurring on a daily basis, Black Broadway artists are using their voices to promote change. In an effort to keep the conversation growing, Broadway.com invited Aladdin star Michael James Scott to moderate a weekly roundtable discussion on Broadway.com’s #LiveatFive. This week Scott was joined by Tony winner Nikki M. James and Tony nominess Brandon Victor Dixon and Montego Glover and they discussed the importance of allowing Black stories be shared on the stage.

James, who earned a Tony Award for her turn in The Book of Mormon, has found great inspiration in seeing others use social media as a way to spark conversation and show support for the racial equality movement. “I’ve never not been having these conversations with my friends and family and co-workers,” she said. “I’m pretty vocal about my feeling and race relations and microaggressions, and I’m not shy about calling people out. What I’m nervous about, for me personally, is how much of my thoughts and feelings I want to put out on social media landscape. I recognize that I have a platform and followers and I have the ability to help educate and share, but I get nervous about sending things out in a way thats not a dialogue. I’ve been watching so many of my brave friends really using their platform in such a beautiful way, and I felt anxious about putting something out without being able to have a discussion, which is why I think it’s so important.”

Earning a Tony nomination for starring in Memphis, Glover looks at her career as a way to faciliate conversations and allow different viewpoints to be seen. “I truly treasure being an actress because I get to tell these stories that are accessible and relatable to just about everybody,” she said. “The human experience is the human experience. And now we’ve awakened to the Black experience and we’re going to spend some time on it.”

Dixon, who is a producer as well as a performer who was Tony-nominated for his performances in The Color Purple and Shuffle Along, or, the Making of the Musical Sensation of 1921 and All That Followed, is focused on making sure the stories he helps tell are rooted in truth. “I did a show about Berry Gordy; I did a show about Ray Charles; I did a piece about Sam Cooke,” he said. “All of these individuals were the first artists to own their masters, own their publishing, have their own record label. They were about the independent, economic and political empowerment for Black people and Black communities. They were also about recognizing the path to growth is by investing in black youth, thats all Berry Gordy did. Invest in the youth of the Black communities and the whole world will transform.”

“Invest in the youth of the Black communities and the whole world will transform.”

Since the start of the recent outcry for racial justice, the Broadway industry has seen the creation of several new organizations, including the recently announced Black Theatre United, of which Dixon is a founding member. All of the actors in the roundtable recogize the importance for theatermakers to be more intentional and conscious it comes to taking potential jobs. “There’s a point where we’re all working and looking for the next job,” James said. “The questions have been, ‘How does this project serve my artistic soul and my bank account and my career ambitions?’ There’s this added layer that has become really clear and it’s, ‘What is this job saying? What is the message that’s being sent out?’ Part of the navigation is being aware of what I’m saying, how I’m saying it, and being part of a conversation. The navigation is all about what’s next.”

“For me, it’s about listening and getting still before you start running so you know exactly where you want to run,” Glover said of how she’s taking action. “As you hold up this cause and this movement, you have to decide in the quietness what kind of mover and activist you are, and it doesn’t have to be the same for everyone. As long as you’re fully connected to what it is and you feel it, you can effectively communicate. I can’t do that until I have gotten quiet and really know what my values are.”

Dixon uses his values as a compass for moving forward. “The things I’ve been working on in different spaces are built to address these systemic issues and so part of it for me was reminding myself to continue to do the work,” he said. “How do we create further extensions of the things I’ve been creating for these areas of my community whose consciousness are now expanding to this arena of ‘We have to act differently than we have before. What can we do now?’ It’s about connecting with the community to create those spaces and vehicles for our advancing brothers and sisters. Where are the spaces that we can now start to ingest the information we need to be able to make the plan to move forward into the next phase. It doesn’t just transform today. This takes work.”

To hear the full discussion watch the episode below!