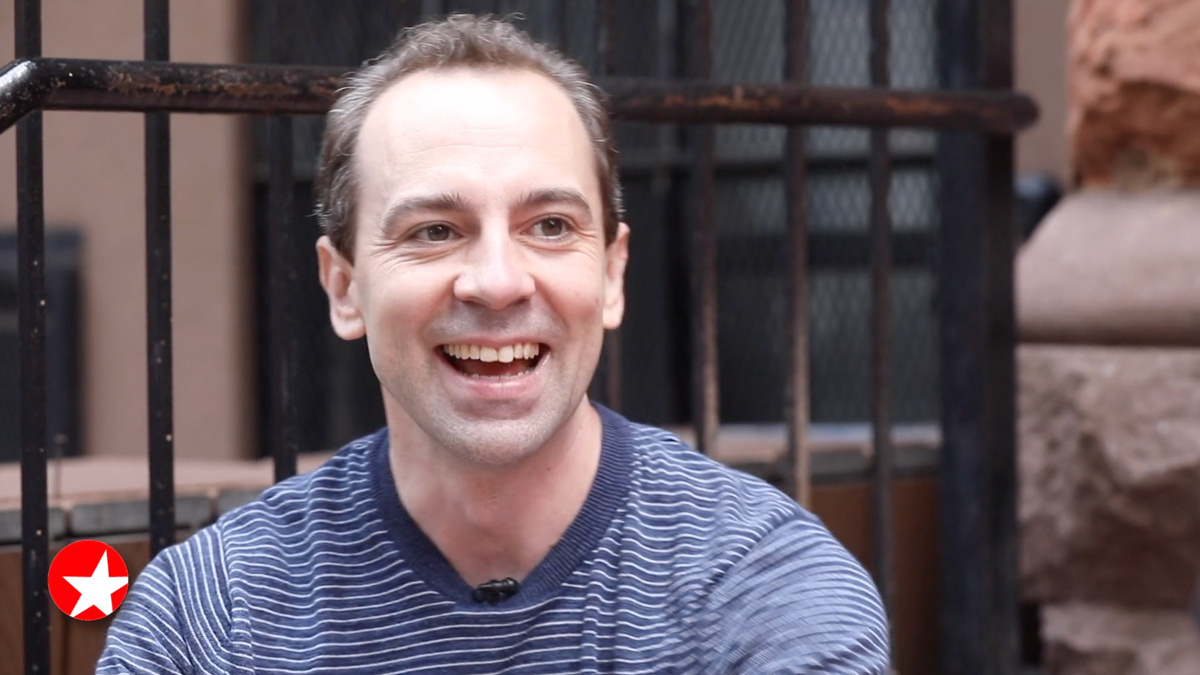 Two months ago, two-time Tony nominee Rob McClure was in the final weeks of playing Broadway’s favorite nanny as the title role in Mrs. Doubtfire. It’s been less than 10 weeks since the new musical closed at the Sondheim Theatre, and McClure is already back on stage, this time as Seymour Krelborn in off-Broadway’s acclaimed Little Shop of Horrors. On a new episode of The Broadway Show, McClure sat on the Westside Theatre stoop with host Tamsen Fadal to talk about going from Scottish grandma to botanist and why this show is “soul food.” Plus, he revealed some important puppet facts that will have you ready for your next trivia night!

“Mrs. Doubtfire finished up, and I was ready to plan summer vacations with my wife and my daughter. You know, relax and stop changing my clothes every two seconds,” McClure said. “And then I got a call that Skylar Astin was finishing up and would I like to come in and play Seymour, and I mean, who doesn’t? If you had told me three weeks ago when I was doing my 31st quick change into an elderly Scottish woman that my next job would be a more absurd story, I would not have believed you.”

As a long-time puppet enthusiast, McClure is more than ready to share the stage with the scene-stealing Audrey II. “The puppeteers are extraordinary. It’s such a difference when you’ve got a real puppeteer in there,” he said. “I’ve been obsessed with puppets my whole life and the history of puppetry with this show and the film is so fun. Here’s some fun trivia: in the movie, the plant had so many different little servos in its mouth to make all those mouth shapes that they couldn’t do it in real time. Anytime the plant was talking, it was at quarter speed and then they’d speed it up in playback. Which means that any of those two shots with Rick Moranis, he’s also acting in quarter speed so that they could puppeteer the plant and have it articulate as much as they wanted. I have #nerdcred.”

After taking center stage in a theater that houses over one thousand guests nightly, McClure is excited to step into a smaller venue. “This is less than 300 seats. To tell a small story in a small space is one thing, but something that’s this over the top and so much fun and has this incredible cult following, it’s soul food,” he said. “Howard Ashman built this show to be seen in places like this. This is where this show is meant to be and where it thrives. In a weird way, it feels very much like the atmosphere where people might have seen Little Shop at their high school or at a community theater or wherever they were introduced to the show. Every single person in this building is firing on all cylinders and is at the height of their game. The energy is out of control.”

Watch the interview below, and head here to check your local listings for The Broadway Show. Hosted by Emmy-winning anchor Tamsen Fadal, it is the only nationally syndicated weekly theater news program.